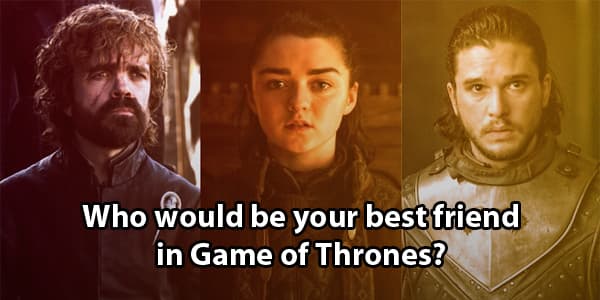 Have you ever wondered, who would be your best friend in Game Of Thrones? Answer these questions about yourself and our quiz will let you know the character that would be your Westeros BFF. Possible results include Jon Snow, Arya Stark, Tyrion Lannister, and several more.

Who Would Be Your Best Friend In Game Of Thrones?

Instructions: All you have to do is answer the questions below about yourself. Try to be honest with your answers and don’t just try to get your favorite character. After you click each answer, it will automatically move you on to the next one.

What is your favorite activity to do with your friends?

Which of these qualities do you value the most in a friend?

What is your favorite great house of Westeros?

Choose your favorite type of movie:

Which of these characters do you think you would get along the best with?

Choose the thing that most excites you

All Of The Potential Quiz Results:

Here are all of the characters that you could have gotten on our quiz and also some more details about each of them.

If you got Arya Stark, that likely means you are down for an adventure. Chances are that you want a best friend who is just as adventurous as you are and is down to try new things. Arya is a badass that will also be able to protect you from any danger. I think that most people could use a badass woman like her in their lives.

If you got Daenerys Targaryen, you are likely someone who is ambitious and has a lot of goals that you want to accomplish. Chances are that you want a best friend who is going to help you accomplish those goals instead of standing in your way. Daenerys is also a big fan of animals, from her various horses to her three dragons. I think that most people would love a best friend with a pet dragon (or three).

If you got Jaime Lannister, you are likely someone who loves to play or watch sports. In Jaime’s case, he is one of the greatest warriors of all time and is someone who loves to be superior on the battlefield. Jaime is also someone who is very family-oriented and will do anything to protect them. Jaime is a complicated character but he is someone that seems like he would be a loyal friend. He is also a badass fighter who could protect you with only one hand.

If you got Jon Snow, you are likely someone who values honesty and tries to be the best person that you can be. Chances are that you are looking for a best friend who will never lie to you and someone who you can trust with your life. If Jon Snow was your best friend, your secrets would be safe with him and he would also be down for an adventure at any time. Everybody could use a buddy like Jon Snow.

If you got Samwell Tarly, you are likely someone who is looking for a kind and reliable best friend. That would be someone who listens and genuinely cares about what you have to say. Chances are that you are also looking for a genuine person that will always be there for you. Samwell Tarly is just a good dude and a lot of people would be lucky to have him as their BFF.

If you got Sansa Stark on our quiz, you are likely someone who enjoys shopping and going to the spa. Chances are that you want a best friend who is strong, resilient, and enjoys a good love story. Sansa is someone who has grown tremendously throughout her life and has used her bad experiences to help her become a stronger person.

If you got Tyrion Lannister on our quiz, that means you are someone who enjoys humor mixed with getting intoxicated. Chances are that you want a best friend who is going to make you laugh and who will also drink with you all night. Tyrion is a very intelligent guy, who you would learn a lot of new things from. Everybody could use a drinking buddy like Tyrion.

So, who would be your best friend in Game Of Thrones? Let me know in the comment section below or on Twitter and make sure to also share this with your friends so that you can compare your results. Personally, I got Tyrion and I think that it fits me and my best friend pretty well.

You can also check out our quiz on which Great House that you would belong in. 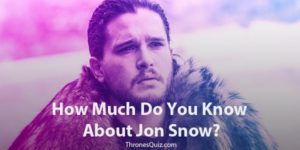