Have you ever wondered, which Game of Thrones couple are you and your partner? If so, you have come to the right place. Answer these questions about your relationship and we will let you know the couple from the series that you resemble. Possible options include Jon Snow & Ygritte, Ned & Catelyn Stark, Cersei & Jaime Lannister, and more. The goal is to match your current relationship with one of the iconic couples from the series.

Which Game Of Thrones Couple Are You?

INSTRUCTIONS: All you have to do is answer the questions about you and your partner below. At the very end, it will let you know the couple from the series that you are most like. The quiz will automatically move on to the next question after you pick an answer.

How did you and your partner meet?

In one word, how would you best describe your relationship?

Choose the Disney relationship that best matches your own

Choose your favorite male character in Game of Thrones out of the ones listed:

Choose your favorite female character in Game of Thrones out of the ones listed:

Where would you and your partner most like to live?

How long have you guys been together?

Game Of Thrones Relationships Quiz: All Of The Possible Results:

Here are all of the possible results that you could have gotten on our quiz. This also includes a few additional tidbits about their relationship and more.

Jon Snow and Ygritte are one of the most interesting couples in the entire series. They went from prisoner and captor to being passionately in love. Not only that, Kit Harington and Rose Leslie ended up getting married in real life. They a true love story, on and off-screen. I guess that both Kit and Rose took notes from Ygritte when she said they should have never left the cave. Lovers and best friends both on and off-screen is pretty special!

Even though they were only together for a short period of time, Daenerys Targaryen and Khal Drogo are one of the most iconic couples in the entire series. After being forced together, they ended up falling in love. They are a great example of a couple coming together, despite being from very different cultures/ backgrounds. They are also a reason why some couples refer to one another as “my sun and stars” or “moon of my life”.

Cersei Lannister and Jaime Lannister are another one of the most iconic couples in the entire series. The series follows their love story from season 1 to season 8, which includes all of the ups and downs in between. Despite all of the messed up things that happened, one thing remained the same: their fierce loyalty to one another. They were together at birth and they were also together when they died.

The duo of Ned and Catelyn Stark were the strongest couple that viewers were first introduced to. Ned Stark played the role of the honorable and respected dad. Catelyn was also a strong motherly figure who would defend her children to the death. Despite the issues that Jon Snow brought into their life, Ned and Catelyn seemed to have one of the most mature relationships in the entire series. They are good parents and a duo that you would be proud to call mom and dad.

Loras Tyrell and Renly Baratheon were the first same-sex relationship that we were introduced to in the series. Renly was a King and Loras was a Knight, who also happened to be the Queen’s brother. Their relationship was kept completely secret, out of fear that it would ruin Renly’s image as king. Despite all of that, there is no denying that these two were in love.

Samwell Taryl and Gilly are probably the most relatable couple in the entire series. They bickered with one another but also shared many cute moments throughout the series. Gilly helped Sam become a better man and helped him face his fears. Sam returned the favor by teaching Gilly how to read and also raised her son as if it were his own. Their storyline was straight out of a romantic comedy.

Robb and Talisa Stark seemed like they were living in a fairytale. A king met a beautiful nurse and they fell in love. In true romantic fashion, Robb broke a marriage pack in order to be with the woman that he truly loved. Unfortunately, we all know how this turned out. They were both murdered (along with their unborn child) in cold blood during the infamous ‘Red Wedding’ scene. Despite their brutal deaths, there is no denying that their relationship was straight out of a Disney movie.

Sansa Stark was forced to marry Joffrey Baratheon in order to merge the Baratheon and Stark houses. This was the definition of a toxic relationship, which included abuse and torment. If you got this result on the quiz, you probably need to get out of your relationship right now.

So, which Game of Thrones couple are you? Let me know in the comment section below or on Twitter. Personally, I got Sam and Gilly. I think this fits me and my partner very well as we are always bantering with one another and trying to help each other improve ourselves.

Make sure to share this with your friends so that you can compare who they got too! You should also take our Great Houses of Westeros quiz which will tell you the family that you would belong to! 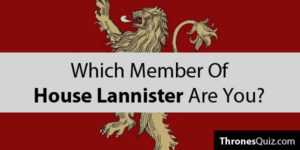 1) Which Westeros House Would You Belong In?

2) Which Game Of Thrones Character Are You?

4) Which Game Of Thrones Woman Are You?

5) Which Game Of Thrones Couple Are You?